The wind was strong enough to clear the thoughts from your head if you faced the wrong way.  Not unusual for Grande Prairie.  It was also a flesh roasting 29 degrees.  Sigh.  We arrived at Thrill Hill hole #1 as they were about to divide the group into random teams.  The excitement was building.  We each, of course, carried a pair of Sport Connection Discs.  (The same ones we recently donated to the Grande Prairie Public Library’s “Library of Things.”)  In case you haven’t guessed, it was time to explore disc golf.

To start with, we have to say a huge THANK YOU to the Grande Prairie Disc Golf Club for taking the time to show us the ropes.  Specifically, thank you to Jake Langer, Sam McColman, Carson Bumstead and Kenny Giesbrecht for letting us accompany them on their round and explaining how things are done. 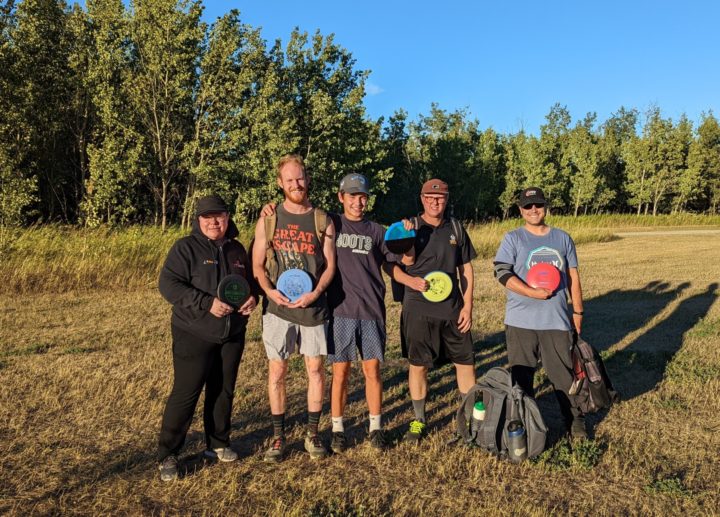 Disc golf is a game in which players throw a disc at a basket using rules similar to golf.  Discs generally come in three edge profiles, driver, mid-range and putter. (More on that later.)

Now, you may be thinking; “Isn’t disc golf just trying to throw a frisbee into a basket?”  The answer is “No.”  Disc golf is not played with frisbees, although we certainly get the confusion and the dog doesn’t see the difference.

According to www.discgolfreport.com “Frisbees are designed specifically for throwing and catching, with a tall profile and rounded outer edge. Disc golf discs are designed specifically for only throwing and not catching. Golf discs typically have a thinner profile and a sharper outer edge to increase aerodynamics and distance.” 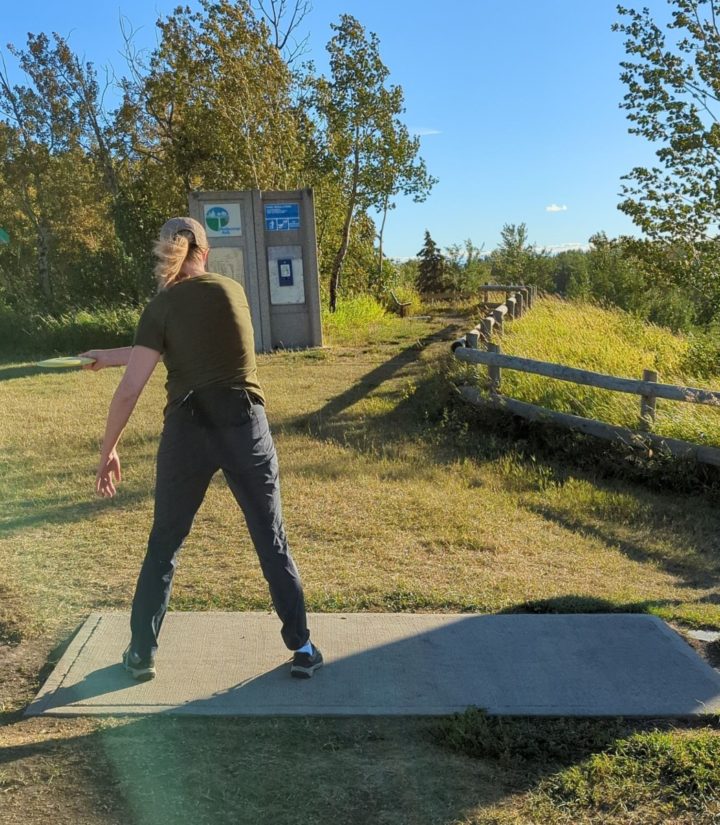 We started out from the Tee Box (A concrete slab measuring no smaller than 1.2 meters x 3 meters) with our ‘Driver’ discs.  (Discs where most of the mass is concentrated on the outer rim.)  While throwing this disc you grip it with all 4 fingertips gripping inside the rim. (You need very short fingernails for this to be comfortable) You do a side-step-shuffle and fling your arm out, releasing the disc.

Once you get close to the basket you switch to ‘putter’ discs. They are designed to fly straight and have a sharper profile.  This makes it easier to aim and get them into the basket…theoretically.  When you throw the putter discs you change the way you grip them.  You hold them with your index finger along the edge, using it as a guide. 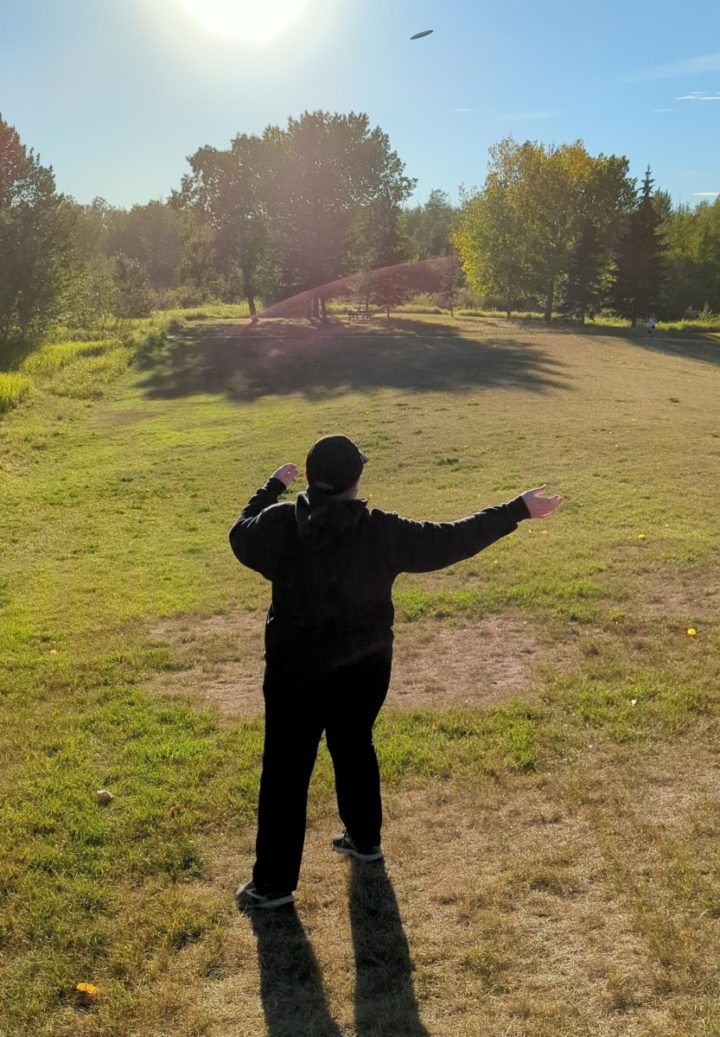 Overall, it was an interesting evening.  The wind was huge, but only affected some shots as we were often in the valley areas.  It’s a great way to spend time outdoors, with friends or alone.  Be prepared to spend some time in the bushes hunting for where exactly your disc landed. (I suggest brightly coloured discs.)  While the guys all had more than a dozen discs, it should be noted that we only had two discs each and they were enough to play a game and get a feel for the sport while enjoying the evening.

We are very lucky here in Grande Prairie.  We have three great disc golf courses (Thrill Hill, South Bear & Evergreen) which can all be played for free.  (I have heard rumours that a couple of them are ranked in Canada’s top ten courses.) Discs can be borrowed from the Ernie Radbourne Pavilion in Muskoseepi Park and the Grande Prairie Public Library’s Library of Things.

I recommend that if you are looking for something to do outside in an evening you give it a try.  It’s a great outdoor activity and it is suitable for the family.

Have you tried a new sport this year?  If so how did it go? 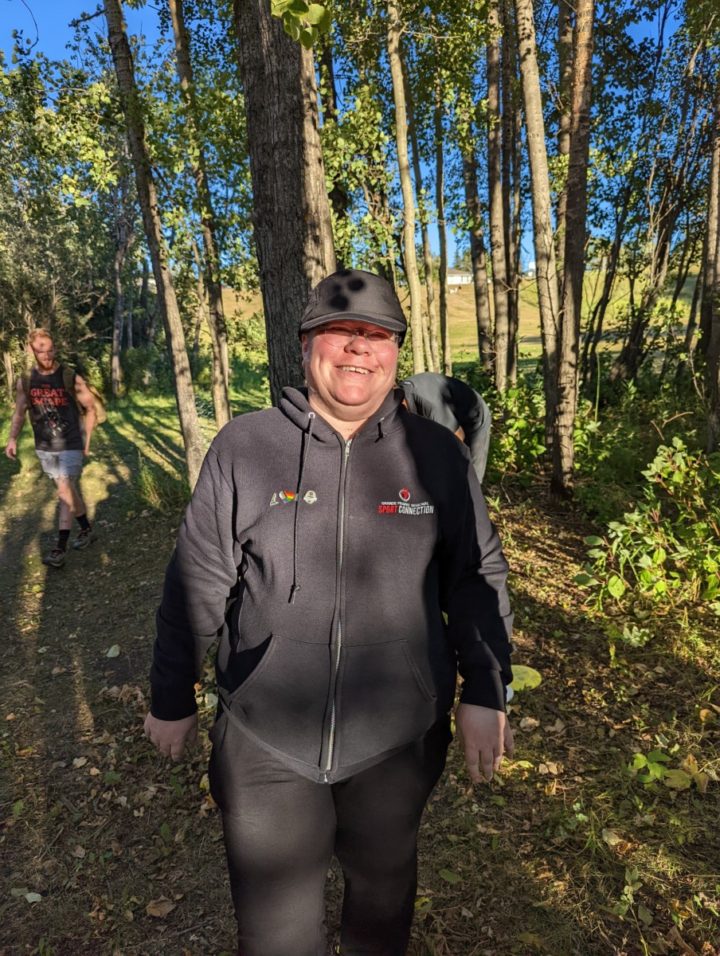 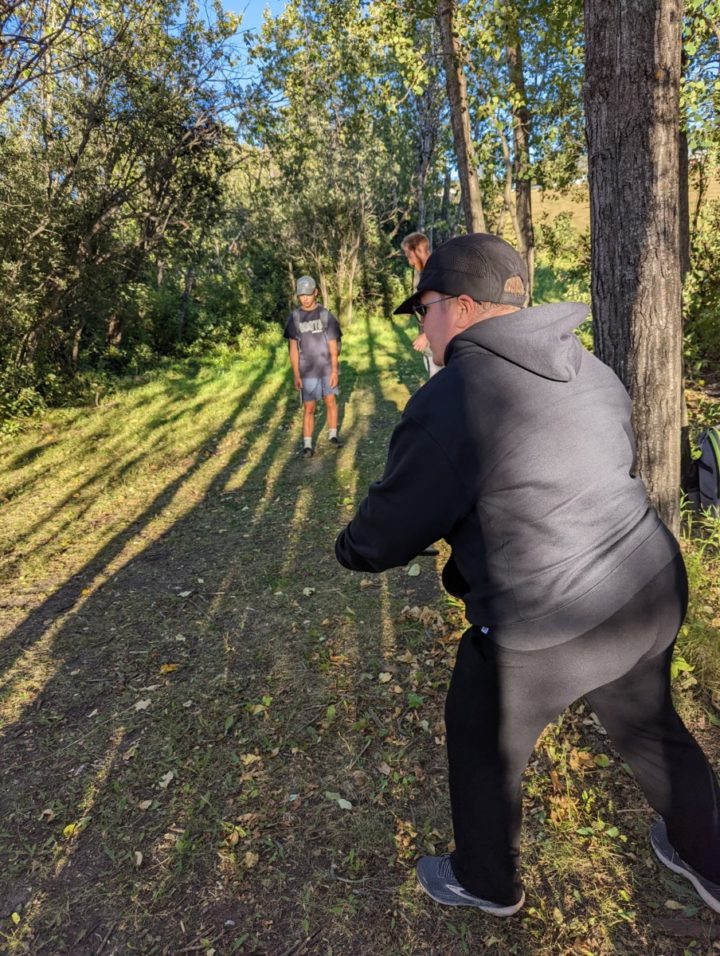